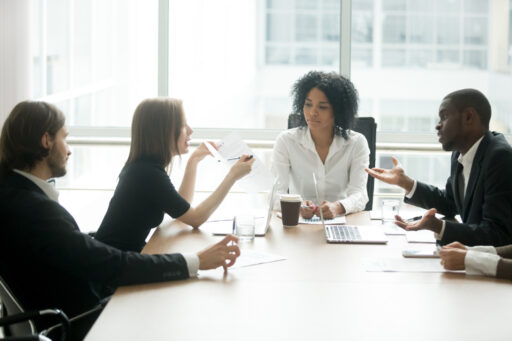 Conflicts are inevitable in virtually every workplace. These incidents present as much risk as they do opportunities for growth. Approached correctly, conflicts can be learning opportunities. Approached incorrectly, conflicts will erode team cohesion and cultivate resentment and tension in the workplace. If you have experienced workplace conflict in the past, it’s easy to see how these situations can spiral out of control. Some conflicts arise over disagreements about the direction a project should take, others develop out of personal tensions between coworkers.

No matter how a workplace conflict arises, it’s essential to know a few conflict resolution strategies that can not only defuse tense situations but also create the foundations for growth out of them. The team at Shapiro Negotiations has developed a few actionable strategies that can help you identify the sources of workplace conflicts and adjust your approach to navigate these scenarios more skillfully.

One: Don’t Linger on Positions, Consider Interests Instead

Perhaps the best way to approach any type of negotiation is to steer toward a win-win situation. Instead of focusing on “winning,” adjust your approach in such a way that you reach cohesion with the other party’s interests. This applies to workplace conflict resolution as well. One of the most potent conflict resolution strategies is to simply let go of a position and align with interests instead. It’s human nature to cling to a position when a disagreement arises. Even when confronted with conflicting evidence about the usefulness or viability of a position, some people will attempt to find anything they can to justify their positions and hold to them as long as possible. Instead of focusing on what you want, start thinking about why you want it.

Two: Aim for the Middle Ground

No one likes losing. This is a fundamental rule of human interaction and virtually every kind of business negotiation. Aiming for the middle ground in a conflict is one of the best conflict resolution strategies simply because it allows the “weaker” side to save face. Compromise is a powerful tool. Once you identify why the other party is holding the position they have, start looking for opportunities to open up the middle ground and achieve a compromise. If one side is having trouble letting go of a position out of a subconscious fear of losing face, offering the middle ground is a good way to coax them toward a more agreeable state.

It’s not uncommon for people to assume that moving toward compromise is a sign of weakness. In reality, this belief is rooted in egotism. More often than not, a person who believes that compromise is entirely off the table as a potential solution is not really looking for a solution at all but rather aims for a “victory” over the other side. This is not a healthy mindset to have in the workplace, so it’s definitely helpful to maintain a level of agreeableness while still holding true to the facts that support your side of the argument.

When a workplace conflict arises, it’s only natural for the parties involved to make assumptions about the others. You might assume another party is taking their apparent position based on specific factors, but there is no way to know if this is the case without asking. Direct questions that target potential assumptions plays off the first two tips in this post: when you ask questions that target assumptions, you inherently work toward revealing the other party’s interests and work toward a potential compromise.

Asking pointed questions could be one of your most powerful conflict resolution strategies. These questions should target involved parties’ interests and break down the assumptions each of the parties might be making about one another.

Words are imtortant, but more than 90% of all communication occurs through body language and posturing. Do some research into nonverbal cues and look for them during your discussions with the other party. The way a person postures can indicate aggression, agreeableness, indecision, or defensiveness.

The ability to read the opposition is one of the best tools you can have when it comes to developing your conflict resolution strategies. Body language is also a powerful tool for intimidation. In fact, workplace bullies often lean heavily on imposing body language to get what they want from their peers. Make understanding body language a priority if you want to cultivate better conflict resolution strategies for the workplace.

Five: Learn How to Truly Listen

It’s not uncommon for people to believe they are really listening when they are simply waiting for their turn to talk. To effectively defuse a workplace conflict, it is essential that you fully understand the other party’s position. Listening to what they have to say as allows you to uncover their underlying interests more easily. This tip leans on the others covered in this post: you need to know how to really listen, how to read body language, and how to move toward compromise if you want to turn the current conflict into a learning opportunity.

These conflict resolution strategies can help you develop your own tactics for navigating difficult situations in the workplace. In many cases, workplace conflicts arise out of misunderstandings, but strong personalities can be difficult to manage for many people. These strategies can help you identify personality quirks that contribute to miscommunication and also reveal hidden potential for growth out of conflict. Look for opportunities to approach these situations with a goal of diplomacy instead of victory, and the parties involved can all grow from the experience.

Shapiro Negotiations specializes in providing advanced business negotiation training to businesses across all industries. If you need to hone your conflict resolution strategies or simply want to enable a more cohesive workplace, contact Shapiro Negotiations today to learn more about the training courses we offer.

1 thought on “How to Strategically Overcome Workplace Conflicts”