How does a small organization manage to broker a deal with the biggest names in the industry, promoting them from obscurity into viral status? Or a longtime employee secure a well-deserved raise, along with a substantial benefits package and other privileges? Negotiation.

There are several instances in a work environment that require the ability to negotiate. Yet despite the importance of such a skill, negotiating is something oft looked upon with great unease. In fact, Americans as a whole are generally weaker than their international counterparts in this respect. According to a LinkedIn survey shared by Business News Daily, “more than 40% of U.S. employees don’t feel confident in their negotiation skills, while a quarter admit to never having negotiated at all in the workplace.”

If you are currently preparing to enter negotiations yourself, then you might have personally experienced those feelings of hesitation and anxiety. Perhaps you are about to discuss your salary for a new position, outline the parameters of a partnership, settle the terms of a buyout offer, or assemble a new client contract. Regardless of the reason, the strategies you can apply to be successful in this area are the same. By familiarizing yourself with this guide of useful negotiating tactics, you will find yourself transformed into an effective negotiator. 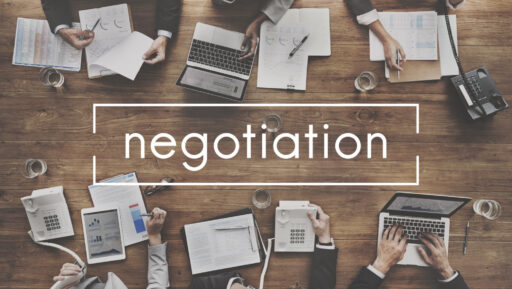 The Three Ps of Negotiation

Shapiro’s approach to negotiation is founded on the three Ps: Prepare, Probe, and Propose. Too often, negotiations are approached from the perspective of a battle, where there are winners and losers. Such a mindset promotes arrogance and aggressiveness that can ultimately backfire and leave you unsuccessful in your pursuits, or worse, facing repercussions. Barging into a situation and expecting to succeed is naive at best; real negotiations require much more subtlety and patience, with the process beginning long before the parties actually sit face to face. These three Ps form the basis of the negotiation tactics outlined below and should be kept present in your mind as you read on.

The first of Shapiro’s P’s, preparation, is also the first step to any successful negotiation, and the most often overlooked. Knowledge is a powerful tool. Doing research ahead of time will allow you to choose your approach wisely and set realistic expectations for the outcome of your interaction. Start by gathering some intel on the party you will be approaching. Subjects of note include previous deals they’ve negotiated, their mission statement and values, and their current business needs. Your network of contacts can be a useful resource in this endeavor.

Once you’ve done your research, the next part of your preparation should be setting clear, achievable goals to pursue during negotiations. Ensuring that what you’re requesting is actually feasible is critical, but putting in the work at this stage also protects you from asking for too little. As discussed by BizJournals, the latter often occurs out of fear of the word “no.” In actuality, it is far worse to get an immediate “yes” to your request, as it indicates that you very easily could have asked for more.

Use this time and the knowledge you’ve gained to determine what is your best case scenario, as well as the lowest offer you’re willing to accept. Take into account the value you bring to the table, and any opportunities you might have to add to that value. You will also have to consider what your alternatives are. If you go into a negotiation without first determining your BATNAs, you are readily offering yourself up to the party and giving them full control to respond in any way they like. The more options you have, the more power you have as well.

Preparing all this in advance will give you more confidence and help keep you from settling for less than you’re worth in the heat of the moment.

3. Take Advantage of the Elements Within Your Control

While you may not be able to force the response you’re looking for, there are certain factors within your control that can tip the scales in your favor. Having a plan of implementation to bring with you shows the viability of your request. It’s a lot easier to say yes to a proposal when you can see everything outlined neatly before you.

You may also be able to control aspects of the meeting itself. When possible, ensure that you are meeting with the party or parties with the authority to actually negotiate with you, instead of paraphrasing your meeting to a superior who you never get to see face to face. There are other more superficial aspects you can control as well, including suggesting the medium of the meeting, naming a location, or even choosing a specific date with nice weather. That last detail might seem trivial, but psychology researcher Nick Kolenda explains that “When the weather is nice, you’re more likely to help people,” increasing your chances of success.

Professionalism is very important when it comes to how you’re perceived by the other parties involved in the negotiation. But humans are social creatures and will also respond emotionally to the cues they are given, even if not consciously. Neil Patel shares a study from Business Insider that illustrates how the first 5 minutes of the encounter can actually predict the outcome of the negotiation. This is a great time to establish rapport and show yourself as a likable person. Being viewed as an amicable collaborator instead of an opponent will yield you far better results.

Likeability also impacts how trustworthy we are perceived to be, a big factor in whether or not the other party is willing to ultimately acquiesce to more than than they’d anticipated.

Depending on the subject, you might find yourself tempted to cut to chase and deliver your proposal right away. Alternatively, the other party could try to pressure you into settling by making an offer at the start. While generally, it’s best to be the one who goes first in order to anchor the negotiation in your favor, starting too early leaves much less room for you to maneuver and strategize, putting you in a situation where you’re more likely to concede your position. At the same time, it’s difficult to avoid answering such a prompt in a way that doesn’t come off as disrespectful.

Here is where Shapiro’s second P, probe, starts becoming relevant. Probing can allow you to regain control of the conversation, as they are suddenly pressured to respond to you instead of the other way around.

Most of what we’ve discussed so far involves ensuring that you have all the information you need to make a solid case. However, it’s not enough to simply come fully prepared and start things off on the right foot. That puts the onus all on you. In reality, it’s just important to engage the other party and probe them for more information on their end of the deal.

When confronted with rejection, be prepared to ask for an explanation. This will give you a better understanding of their reasons, which gives you the information you need to effectively counter them in a logical manner. Probing for details can also help ensure that you’re both on the same page. Misunderstandings are the root of many problems in the workplace, but they’re easy to avoid if you aren’t afraid to ask for more clarification.

Once you’ve taken care of everything else, it’s time to go forward with the third P and make your proposal, but even at this stage, it’s possible to make mistakes that can nullify your previous efforts. By now, you should have determined the most realistic offer, steering clear of aiming too high or too low. However, the other party has a role to play and may counter with an offer of their own. Be wary of any ballpark figures or ranges. These allow them to give the impression of being open to agreeing to a generous deal when, in practice, they are already determined to only honor the minimum amount.

8. When All Else Fails, Give it Time

Keep in mind that even an initial rejection could be turned around under the right circumstances. Sometimes an aspect of your proposal might catch the other party unawares, causing them to make a rash decision without fully examining the possibilities. But negotiations don’t have to cease after just one meeting. Don’t be afraid to suggest reconvening on a later date. Giving them time to sit with your proposal can allow them to consider how it could be put into practice, and will allow you to better prepare your reasoning as well.

Like anything, negotiation is a skill that will improve with practice. Over time, a lot of what we’ve outlined here will become second nature, and you’ll find yourself naturally feeling more self-assured and at ease. But until you’ve reached that stage, you can trust that these tactics will guide you from start to finish, and present you with the highest chances of success.

As you apply them and work hard to prepare ahead of time, probe for more information, and make a smart proposal, you will discover new ways to assess situations, think creatively, and adapt to the information at hand. All those old doubts and insecurities regarding upcoming situations will seem a lot less relevant when confronted with all that you’ve learned. Start putting these tips into action and see how drastically the entire negotiating experience can change from a dreaded, unavoidable chore to an exciting opportunity. Once you’re a little more comfortable applying these basics, read more about Shapiro’s negotiation tactics to further develop your skills.